Yesterday, I was lucky enough to get to meet a fabulous author, Susan Fletcher. She's written numerous novels including The Dragon Chronicles trilogy. Our library system asked Susan to tour schools in our region to coincide with our "One Book" program which featured her book Dragon's Milk. I was delighted to be the librarian that got to show her around and introduce her to the school. Yay!

Susan's book, Dragon's Milk, is the story of Kaeldra, a misfit of sorts, who finds she has special powers. She can speak with dragons. And she must, for if Kaeldra cannot bring dragon's milk back to her sister, Lyf will surely die. Trouble begets more trouble and Kaeldra finds herself in a battle to save the draclings.

Dragon's Milk is exciting, on the edge of your seat reading. It's great to see a smart, strong herione taking on all sorts of dangers and doing things she doesn't dream possible. With the action and circumstances, it's a good read for boys too. I can't wait to read the other two books in the series. 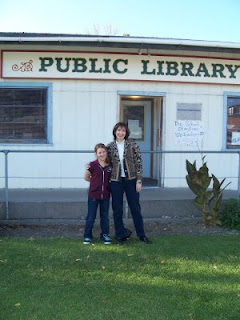 Susan got to meet one big fan, for sure. And yes, that fan belongs to me. My daughter was so excited when she came back to the library after school and got to meet Susan. She waggled her little fingers and said "hi" in a little tiny voice. So cute.

I, of course, was outed as a children's book author by the school librarian. I just can't seem to keep that under wraps around here. Susan was super nice and we talked about blogging(if you're blogging you're not writing, people!) and scbwi and conferences; and I was sad to see her go. It's not too often that there's another children's book writer around.

P.S. She said she wrote her picture book, Dadblamed Union Army Cow, in three weeks! Three weeks! I feel like such a slacker.
Posted by Heather Ayris Burnell at 10:46 PM 1 comment:

Email ThisBlogThis!Share to TwitterShare to FacebookShare to Pinterest
Labels: writers

Now Look What I Went and Signed Up For

I must be crazy.
Posted by Heather Ayris Burnell at 8:52 PM 4 comments:

Email ThisBlogThis!Share to TwitterShare to FacebookShare to Pinterest
Labels: writing 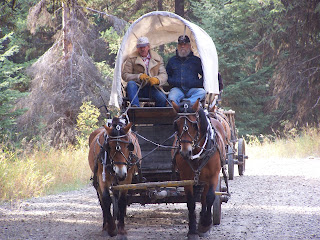 Yesterday I wore a long dress, long johns, boots, a shawl, and a bonnet. I ate beef jerky, dried apples, and granola. I was a pioneer--along with the two 5th grade classes at school.

We met the wagon drivers at a ranch up in the Highlands. We had to wait while they hitched up the horses, so everyone that needed to used the outhouse. And even for an outhouse it was pretty shabby. It was a hole in a board that went onto the ground, not a hole in the ground, just on the ground. Welcome to pioneer days!

The boys used it first. Then we made them go stand over by the wood pile. Good thing, because when one of the girls was using it two of the boards fell off the outside and we had to stand infront of the hole. There were holes on the other three corners anyway, so it didn't matter much I suppose. There was one boy that kept trying to sneak over by the outhouse and I kept sending him away. I'll be sure to keep my daughter away from that one.

After a half an hour of guarding the outhouse, the girls were finally finished. They were wearing alot of clothes. Soon after we headed out. Half the kids got to ride in the wagons; one covered, one open. The rest of us walked. It was windy and cold. Around 20 degrees someone told me later. No wonder I was freezing. But my daughter and I didn't bring coats because we didn't want to carry them. Anyway, we wanted to be authentic. I'm sure cold is authentic.

Now, a horse and wagon is not an easy thing to keep up with, I understand. All the walkers fell behind. But some fell much further behind. Let's just say you could definitely see who would have likely made it as a pioneer and who likely wouldn't have. Some were complaining before we were even halfway. Once we there, I made sure someone else got a turn with them.

We had planned on refilling our waters at the campground. Each person brought one water bottle, which most everyone had drank by the time we got there. Unfortunately, it's been pretty cold this week and the lines were frozen. We were starting to feel even more like pioneers. Thirsty pioneers.

I got to ride in a wagon for maybe 1/2 a mile after lunch. Then we had to get out and push the wagons across a cattle guard after the horses were unhitched. The kids loved doing that, especially the boys. And I got to run carrying a giant rock, across a cattle guard while they yelled, hurry it's slipping! Guess the drivers should have told us we needed a rock beforehand. Luckily I've had practice running across cattleguards.

We walked uphill some more before people were allowed to get into the wagons again. Me and a dad who had walked the whole way got in. So did some tired kids. We sat a while. Us grownups got out because kids needed a ride. We left the tired kids on the wagon. We were surprised when they came running up behind us. When we asked what they were doing, they said they had to get off so the whiney kids could ride.

They came to the conclusion that whiney people get what they want because they make more noise. Not a bad lesson. But these kids, the ones that got off, they are tough. They walked for miles without complaining. Without asking when we were going to get there. They looked around and discovered things. They sang. Thay laughed. They made the best of it. They were pioneers.

We walked twelve or so miles on dirt roads(according to one source it was actually fourteen miles, but who's counting). We tripped on rocks. We slipped on gravel. My daughter actually twisted her ankle. It's pretty sore today. But still, she was happy. She's a lover of historical fiction and there couldn't have been a more perfect field trip for her. No matter what happened, she was loving every minute of it.

And now we have an idea of how it felt to be a pioneer. Yes, I'm tired and sore. But I can't stop thinking about how the pioneers would have gotten up the next day and done it again, and again, and again. Plus they had to gather and make their own food. Clean the dishes. Sleep out in the cold and worry about what might be waiting for them. Find water. Maybe get a cold dip in the lake to clean off. And so much more. All to get to a place they had never seen. Where they didn't know anyone. Both the adults and the children were strong and brave. It's something I wish everyone got to do at least once. It really makes you realize how easy we have it now.
Posted by Heather Ayris Burnell at 8:24 PM 2 comments:

Email ThisBlogThis!Share to TwitterShare to FacebookShare to Pinterest
Labels: life

I went into the pharmacy the other day. It's my favorite shop in town, if I can ignore the dead animals hanging on the walls everywhere. (They do seem to be good for education though. My children now know what a real cougar, buffalo, and mountain sheep look like, among other wild beasts. Still.) But, the pharmacy does have lots of good gift stuff. I usually go there to buy presents. This time I was just browsing.

There was a guy holding a piece of chocolate cake. The caption said something like have another piece of cake, I don't like you looking so thin. Touchee. I love that, but there was something else. I knew that guy holding that cake. I looked over all the pictures. He was the guy in like five other pictures and on the cover. I definitely knew that guy. (Scroll down a tad to the handsome man holding flowers. That's my favorite pic of him.)

Now, when you go into the pharmacy you don't expect to see an old friend lying on the table with his shirt off. But, Adrian was always fun and crazy, so I wouldn't expect anything less. Me, Tini, and Adge always had good times. When we were together it was always the three of us doing some whacky thing. I miss them.

I would not have ever guessed that Adge would grow up to be a model. That he is successful feels like a bonus. I'm just glad he lived long enough to become a grown-up. I saw Adge close to death one time, after he crashed his motorcycle into the back of a truck. It was the most heart-wrenching thing I had ever seen in my life and it really scared me, for a long time. I wanted so badly to help my friend and I couldn't. I couldn't get myself back into that hospital either, no matter how much I wanted to for some reason. I didn't see Adge anymore after that except for one more time actually, when he came back to see me. He asked me to call him. I didn't. I thought it was for his own good. Sometimes I feel bad about that. But, it looks like he's done all right. I'm so glad.

Before I get too sentimental I guess I'll tell you that I believe in the rule of threes. Everthing happens in threes. Bad things. Good things. Weird things. So, when I came upon two people two days in a row I started wondering who the third would be. I really didn't think there would be a third before I blogged this. But there is. An old friend found me online and emailed me. My husband said he thought it was amazing that I knew there would be one more person. I cannot believe that he was still unconvinced of the rule of threes. Silly man.