Launch Party or Strapping on my Tail like a Big Girl 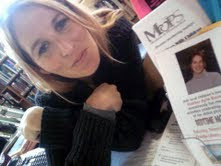 Waiting for a launch party to happen is a funny thing, especially if you work at the place the party is going to be at. Flyers with my picture on them were hung on the bulletin boards and there was a stack of handouts on the desk right next to me. It was a little weird to have pictures of myself hanging around the library, but it was entertaining. I lost count of how many people looked back and forth, back and forth, from me to the flyers, me to the flyers. Then I would hear them whisper to one another, "Is that her?"
"Nah."
"No, I think it is."
"I don't think so. Maybe."
Finally they'd ask, "Hey, is this you?"
I'd smile and say yes, and they would usually have a look of surprise or amazement. I mean, famous authors don't have real jobs, right? (Yes, some people even use that crazy 'F' word. Famous. To which I have to laugh.)

Anyway, I know I could have just piped up and said "That's me!" When I saw them looking, but it's so much more entertaining to see people try to figure out whether it was really me or not. 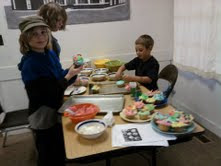 After a few weeks of flyer entertainment, the day of the party finally came. We made monster cupcakes. The head librarian came back from her vacation early just to be there and to make them with my kids. Isn't that sweet?! 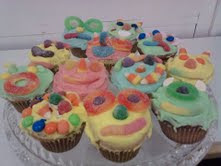 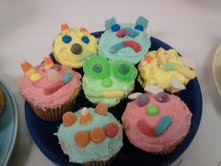 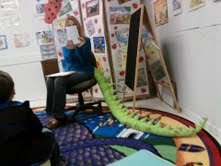 When the time came for me to get up in front of everyone, I thought I was ready, but I did get a little nervous. There were about forty people there and some of them were grownups! I was a big girl, though. I put on my tail and got up there.

I couldn't believe so many people showed up just to see me. Some of them I knew, but many of them I didn't. So, I started off by talking about how much I love books. I told them about how I love books so much that I write them. I told them that that's why I started working at the library, so I could be around more books. 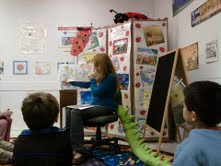 Then I told them all sorts of things about Bedtime Monster. I talked about how long I'd been waiting for the book to come out. I showed them the original cover(they all agreed that Bonnie's cover was much better.) I talked about Bonnie and how she is the illustrator. Then we read the book. It went great! The kids stayed interested the whole time, and I didn't die because a bunch of grownups were watching me. Victory!

Then we all went and partied down. We made monsters out of some monster parts I'd made, did monster origami, put on monster tattoos, and ate popcorn and cupcakes. We even had live music provided by my husband and this crazy guy wearing a tattoo on his head.

Every party needs a crazy guy who lets the kids put tattoos on his head. 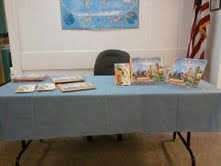 I got to sign some books too! A few people stopped in just to buy my books. I was amazed! Yup, this is where I sat and signed them.

Now, you may wonder why I'm not sitting here, and why I don't have a bunch of great pictures of all the fun stuff we did. Well, I have a little boy who loves to take pictures. He's really quite good at it. He wanted to be the photographer. With all the book stuff I've had going on my kids have really been learning a lot about writing and business and I think it's great for them to participate so, of course, I said yes. I went over things with him beforehand. I know, at the event I should have told him, "here take a picture of this, take a picture of that," but I ended up being a lot busier than I imagined. I mean, it was like I was the host to forty people and the guest of honor. My little guy did take a lot of pictures, he just kinda forgot that I needed them to be of things I could actually use. Oh well, he had fun.

I had another library presentation the next week, but it wasn't such a big production. The crowd was a lot smaller, but the intimacy was nice. I really got to talk to people. And the funny thing was, I wasn't even nervous. I feel ready to strap on my tail and do my next three library presentations in the spring!