Yes, I realize I have been a bit absent as of late. You see, on top of apple harvest (my first one ever as an orchardist), it is also garlic planting time. Wanna know how much garlic the man and I are planting? I don't even want to think about it but I'll tell you--approximately 500 pounds. And he keeps talking about buying more. Zoinks!

Now, garlic planting is kind of nice. You get to be outside in the sun and soft dirt. There is the Diatomaceous Earth. It's basically fossilized remains of algae. You can eat it, but it has silica in it so you should not breathe it. We wear bandanas over our faces. Yay, we look like garlic planting bandits, which is fine as long as it's not too hot. What Diatomaceous Earth does is dehydrate bugs' exoskeletons. It also seems to dry out skin. Yeehaw! I'm really gonna look like a sundried cowboy if I'm not careful!

I do keep thinking about how nice it will be next spring when all the garlic is growing and how it will be great to work for ourselves and actually make a living, assuming all goes well of course. I also like that there's really nothing else I have to do in that moment when I'm planting garlic. I'm just planting. And talking with my husband for an extended period of quiet time, which I really don't get to do often enough these days.

It doesn't take long to slip from garlic planting serenity to the regular rush of life when the alarm goes off and it's time to rush down to school and get the kids, coach the soccer team, do the laundry, cook the dinner, get the kids to bed. Time has been going so quick lately. Here I am at almost two in the morning just finally caught up on emails! But life is good. And I have lots of time to think up stories. Mine is the notebook with all the dirt smudges on it.
Posted by Heather Ayris Burnell at 1:45 AM 4 comments:

How Diana Murray got Her Agent, plus an interview with Brianne Johnson of Writers House

Not too long ago I featured Brianne Johnson of Writers House on my Monster List of Picture Book Agents. That led me to talking to Diana Murray, a fabulous picture book author who is represented by Brianne. Today I am happy to have Diana here to share with us how she signed with her agent. (I can't help but love hearing about her kicking the cyber-street to the curb!) Diana and Brianne were also kind enough to do a little question and answer for us! First, here's Diana's post:

How I Got My Agent

At first, I wasn’t even sure I wanted an agent. For one thing, I had always heard that getting an agent for picture books if you weren’t a) already published, b) also writing novels, and/or c) also an illustrator, was pretty much impossible. On top of that, I wrote exclusively in rhyme. Seemed like a sure recipe for rejection, according to the word on the cyber-street. In addition, I’d read about many agented writers who seemed unhappy or frustrated. Why bother? I figured I might as well continue subbing to publishers on my own. But then...
December 22

I read about Brianne Johnson on Verla Kay’s blueboards and headed over to the Writers House website to investigate further. It was like reading a personal ad and thinking, “Hey! I like long walks on the beach too!” I immediately felt in my gut that it might be a good match. Also, I felt particularly excited about the prospect of working with a go-getter junior agent at a big house. Seemed like a great opportunity. I decided to sub immediately, even though it was just days away from Christmas.

After a few weeks, I was excited to see an email from Brianne in my inbox. I did a double-take to make sure I wasn’t imagining things. It was true! Brianne said she really liked my manuscript and was getting some reads from colleagues. In the meantime, she wanted to see if I had any other work. Luckily, I had written lots of other picture book manuscripts over the years. But how to choose? I based my decision mostly on the feedback I had received during various SCBWI events, and on reactions from my own critique group. I chose to send her five. One manuscript was similar to the first one she liked (it was character-driven, wacky, had plenty of conflict, and was in the range of 500-700 words). Three of the manuscripts were much shorter, younger, and simpler. And the last manuscript was a humorous poetry collection.

I reset my email program to check for new mail “every 1 minute”. And I waited...

Twenty days later, I received a response! But before opening it, I had to go make a sandwich. I couldn’t face this news on an empty stomach, especially since no matter the outcome, there would probably be some cabernet involved.

When I finally opened that email, I read that Brianne liked my writing and wanted to speak with me!

On the phone, Brianne immediately made me feel comfortable and we had a great conversation. That was another good sign that we could work well together. She was enthusiastic and complimentary, but didn’t promise me the moon. Brianne was clear that rhyming picture books were a tough sell in the current market, and I didn’t disagree. By that night, I was signing a contract with her. Within a few months, she sold one picture book to Roaring Brook Press and then another (in a two-book deal) to Katherine Tegen Books.

And now I’ve changed my mind about agents. It’s true that they’re not an absolute necessity when you write picture books. But when you find the right agent for you, it can make all the difference in your career. 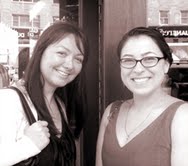 Here are a few answers from Brianne Johnson at Writers House:

What kinds of picture book manuscripts tend to catch your eye?

Funny ones! I love clever, character-driven, LOL-funny manuscripts that leave a lot of room for art, feature somewhat offbeat protagonists, and hold up to repeat readings. In that sense, Diana and I are a truly great match (that, and our shared love of long walks on the beach). When I first read her work I could really see them as picture books, and her sense of humor is amazing. Absolutely no one can read NED THE KNITTING PIRATE or GRIMELDA without literally laughing out loud… I’ve read them both about a million times and LOL every time. You’ll see!

What are some common mistakes you see in query letters for picture books?

Not including the manuscript pasted below the letter! You’d be surprised how many queries I get that leave off the MS itself and just include the pitch. To be honest, with picture book queries, I skim over the letter quickly—paying attention mostly to the intro (big points for a personalized letter) and the bio, particularly if there’s previous publishing experience listed—and skip down to let the manuscript speak for itself. If the manuscript is really great I’ll go back and read the letter more carefully.

Are there certain picture book topics you’re particularly tired of seeing in your submissions pile?

Personally, I’m probably not the best fit for super-oozy-sweet, I-love-you-my-baby-muffin kind of manuscripts. I mean, I’ll always take a look, but I tend to gravitate toward somewhat edgier, funnier stories. Who knows, though? My query scouting style is largely instinct-based and very subjective. Try me! If I love it, I love it.

For those who write both picture books and novels, what do you recommend they query with first?

Probably the novel, although it’s worth mentioning in the letter that you have a picture book text or two up your sleeve.

-----
Diana Murray is the author of forthcoming picture books, NED THE KNITTING PIRATE: A SALTY YARN (Roaring Brook Press/Macmillan, 2014) and GRIMELDA, THE VERY MESSY WITCH (Katherine Tegen Books/HarperCollins, 2014). Diana was awarded the 2010 SCBWI Barbara Karlin Grant and has many poems published and forthcoming in magazines including Spider, Highlights for Children, and Highlights High Five, as well as the And the Crowd Goes Wild! sports-themed poetry anthology. Diana lives in New York City with her husband, two children, and a goldfish named Pickle. You can find Diana on her website, www.dianamurray.com and on Twitter.