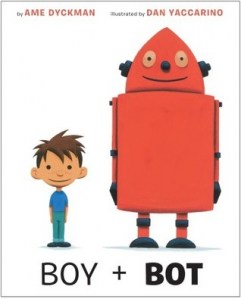 BOY + BOT is the story of a boy and a robot who become friends. It is created by one fabulous duo, Ame Dyckman and Dan Yaccarino. 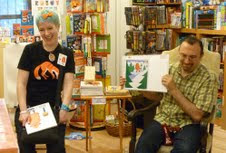 I brought this great book to school, along with a giant BOT, to share with some of my friends in first grade. And thanks to my nice friend Ame Dyckman, the kids got to interview the author and illustrator of a book, which was very exciting! 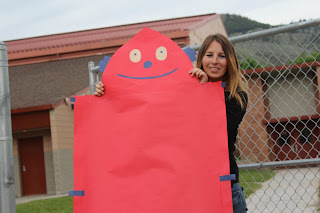 First I told the kids about BOY + BOT's illustrator and showed them a selection of books Dan has illustrated and written, along with some of the stuff he's done for television. Television is impressive, of course, but the kids really ooohed and ahhed over all of the books that Dan has done. Pretty cool. 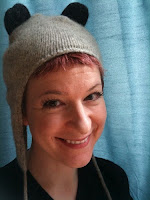 Then I told the kids about Ame and showed them her photo. Did they love her hat with ears? Affirmative. Did they love that she has pink hair? They certainly got excited about it! Did they think it was cool that she wrote a book and they got to ask her questions? Absolutely. And they were even more amazed when I showed them on the globe that Ame (and Dan too) live all the way across the United States far away from us here in Washington.

I think we got a lot of learning done just by talking. We talked about what authors and illustrators do. How they can work anywhere. How they work together along with the publisher. What a publisher is. We even got some geography in there. And we hadn't even started the book yet! But when we did there was lots of wiggling, giggling, and excitement!

After the applause died down, and we talked about misunderstanding and friendship(which is what BOY + BOT is all about), we did some creating of our own and made Bot inspired robots! The kids really got into it and enjoyed coming up with their own robot designs. Some even made baby bots to accompany their big bots. How cool is that! And, of course, the kids came up with questions they wanted to ask Ame and Dan. They wrote them on the giant Bot! 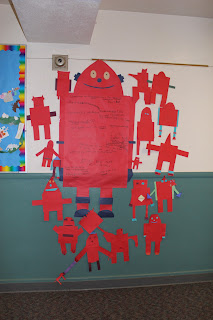 
How did you decide what Boy + Bot were going to look like? –Skyler

Dan: I just drew what my favorite robot would look like.


How long did it take to figure out what Bot was going to look like? -Laurelii


How did you color the pictures? –Katelyn


What did you use to make the illustrations? –Dakota


Dan, were you good at drawing when you were seven? –Reagan

Dan: Not as good as I am now, but I drew every day, so I got better.


How did you learn to draw? –Victor

Dan: By drawing every day.

Dan: I like red. All robots should be red.


Why do you choose to illustrate other authors books as well as your own? -Heather (Okay, I couldn't resist asking Dan and Ame each a question as well.)


What is your favorite color? –Kayla

Dan: All of them.

Ame: My favorite color is blue, like the sky. (And often, my hair!)


I like your book. Why did Bot go swimming? –Kyra

Ame: Thanks Kyra! I like you name. Why did Bot go swimming? It was hot. (Don't worry. Bot is waterproof!)


How did you think of the story? –Kylar

Ame: I love robots. And I love friendship stories. I thought, "I'll write a robot friendship story!" And once, when I rolled down a hill, I got poked by a rock. So, I wrote that in, too.

Ame: Bot's real name is Bot. Boy hasn't told me what his name is yet.


Does the inventor have any other inventions? –Elijah

Ame: Lots! Right now, the Inventor is working on an automatic swinging hammock. (He's been a little dizzy lately.)


Does Bot have to work for the inventor or does he just get to play? –David

Ame: Bot has chores. When his chores are done, he gets to play. Watt (the little light bulb robot) is the Inventor's helper. This makes Watt happy.


You did an Unread interview with me way back in 2009! Now that you are a published author, how have things changed for you? -Heather

Ame: Now I get to write my name in a book and not get in trouble. But what do I love best? When kids and grandparents and teachers let me know they like Boy + Bot. That's the greatest thing ever!

And mine and Ame's definite favorite question:
Did it take more than one day to make the book? -Joey

Dan: Yes, it took me about three months to make the paintings.

Ame: And Joey, if you count the whole entire process (from the day I finished the 1st draft of the text for BOY + BOT to the day it went on sale), it was about 1,225 days! Do I hope you like our book? Affirmative!

*You may have noticed a lack of kids in the photos of this post! That is because there are rules and there was no time to deal with permission slips and all that. I do have permission to show one kid, who happens to be my personal helper on all things first grade related. 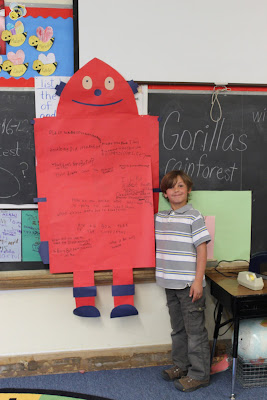 So, we were driving back from feeding our bees at our farm in town. Enjoying that we had an actual day off. The first in ages! We've closed the restaurant for a while. No one had soccer practice. It was sunny and warm and lovely.

Unfortunately, my husband has a really good eye...for swarms of bees. And when he sees one, he can't just pass it up. I pointed out that the swarm was in a really tall tree. Yes, of course we could get a ladder. But the branches were really skinny. It was more like a giant bush. It had danger written all over it. Alas, he has no fear.

So, we got permission from the tree owner. We borrowed a ladder, some rope, a saw, and some pruning shears from a friend who said, "heck no!" he wasn't going to come watch.

I held the ladder. It was leaned against a few rather spindly branches and the man without fear climbed up. He tied a rope around the branch with the swarm on it. Just about that time a couple of guys showed up who thought that seeing a swarm like that was a once in a lifetime opportunity. I didn't bother to mention that we captured five of our own swarms last year. I mean, the guys were super excited. Plus now we had helpers! While my boys looked on from the comfort of the car, I held the ladder, the new helpers pulled the branch down with the rope, and the man cut the branch.

Of course at this point, one might think we had a plan. One of the guys asked just that as the branch fell and we were showered with bees. I shouted to my boys to close the car door. Twice. (They seem to take after their dad in the fear department.) Our manly helper men ran around flailing and shooing bees off themselves. My husband sat in the tree, bees swirling all around him while I held onto the ladder with all my might because he had gotten so far out on that skinny branch it looked like it was about to snap. Bees rained down on me like angry black and yellow hailstones.

I had to laugh. I mean, I can't honestly say that I wasn't a little bit afraid. It would be silly not to be when there are 30,000 or so bees that could sting if they really wanted to. But they didn't. Bees usually only sting when they have a hive to protect or when they get squished. I actually felt pretty dang calm. I must be getting used to this beekeeping thing a little bit.

I had taken some photos to show you, but as luck would have it, my phone died today. Just imagine a big buzzing ball dripping from a branch. If you do want to see a photo of a swarm, google images has lots.

And yes, I do have a couple of bee stories swirling about here somewhere. Now that it's bee season I might just have to pick them up again.