The Unread - Interview with Dana Carey

Dana Carey is an aspiring children's book writer and illustrator living in France. She's an active SCBWI member, goes to Paris for vacation, and plays badminton! I'm so happy to have met her via Twitter. I just know if we lived closer we'd totally hang out and try to kick each others butts in badminton while discussing writing and subbing and all those good things kidlit writers love to talk about. It would be awesome! She may be too far away for that, but I'm happy to have connected with her, and I couldn't resist asking her to be the next victim of The Unread so I could learn more about her...


How long have you been writing and illustrating for children? What made you decide to do so?

I started dipping my toe in around 8 years ago but I didn't have any clear goals until about 5 years ago. I've always been interested in art and books; these are constants in my life. I was a graphic designer then (after I moved to France and had a child) I began teaching English as a second language. And like so many people, while reading tons of books with my daughter, I became more and more fascinated by kids' books. So I feel like everything in my life sort of converged and here I am.


What types of stories do you like to create?

Basically, I'm up for making all kinds of picture books: character-based or concept books, serious or irreverent.


Where do you find inspiration?

Memories. I remember a lot from my childhood so I start there but the story usually turns out quite differently from the initial memory. But stories come from other sources too. For example, when I did Picture Book Idea Month I took cues from Tara Lazar and her guest bloggers; they suggested lots of things to spark ideas such as listening to music which worked for me.


Do you hope to create your own books entirely or would you like to write and illustrate for others as well?

I'd always consider every opportunity that came my way.


Do you feel you have an illustration style, or is it still developing?

Style is such a difficult question. I started out painting and that style developed very quickly and very organically. When I started illustrating my own stories I felt the need to adapt how I paint to the particular story so "having a style" that I always have to adhere to might be detrimental to the work I want to do. There's a lot said online about style and portfolios. I've spent time worrying about developing a style for kids' books and working up a general portfolio. But I've decided to concentrate on writing and making my dummy books. It's a struggle at times but I think I'm getting somewhere.


You’re an active member of SCBWI France. How has participating in SCBWI helped you?

SCBWI has helped enormously. I've learned so much there. In fact when I was "dipping my toe in" I went to a talk organized by SCBWI France at the American Library. Writer/illustrator Doug Cushman was presenting his work and I thought the whole evening, his presentation and the group was so great that I kept attending their events then signed up as a member. Now I'm the Assistant Regional Advisor. I've learned about the industry and how it works by attending events (and taking lots of notes) but volunteering has helped me to get to know the group. Contact with people who care about the same things you care about is wonderful.


What’s the best piece of knowledge you’ve learned about the children’s publishing industry so far?


Do you belong to a critique group? How has it helped you? If you don’t: How do you do it without one?

I live in northwestern France, far from a sizable anglophone community so unfortunately face-to-face crit groups are hard to come by. I've tried online groups twice and they always fell apart; I think it's easier for people to shrug off responsibilty when they don't have to face the group. But I know there are groups out there that function very well online so I haven't given up hope. When I was in my first group, I realized how much I needed to learn so when it ended I took a one-month intensive picture book writing class with Anastasia Suen online. This helped me progress in my writing and taught me so much about the publishing industry. Now I make up for the lack of a crit group with individual reviews at SCBWI.


I’ve read about writer’s concerns with subbing overseas. Do you find that it creates obstacles when sending out submissions?

I think the industry is global so I hesitate to say there are obstacles. A lot happens in email. The only thing is sending out dummy books; if I want them back I need stamps for an SASE from the country I'm sending to. I've had interesting conversations with postal workers in England while trying to buy stamps online from outside the UK (you can't but you can buy stamps from their stamp collecting department!)


If you could live in any book, which one would it be and why? 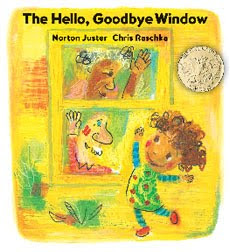 "The Hello, Goodbye Window" by Norton Juster and Chris Raschka. I love this book and I think living with Nanna and Poppy in that big kitchen would be heaven. There's stuff in the drawers, you can color at the big table and eat oatmeal with bananas and raisins. This is one of those books where the words and the pictures stand alone and come together perfectly.


Want to hear more from Dana? You can find her at her blog, UP IN THE ATTIC LATELY, where she promises she'll be posting more come September. You can also connect with her on Twitter where she's @DanaFR.
Posted by Heather Ayris Burnell at 12:35 PM