When something critical to the storyline happens that is not evident in the text. This means that if an agent, editor, or illustrator is reading your manuscript that the image your words will bring to mind is different or even opposite of what you have said.

For example: You’re text says, “Meredith put the book back nicely onto the shelf.” But really, Meredith does not put the book onto the shelf nicely at all because there’s going to be a catastrophic book pile up that comes crashing down and it is all Meredith’s fault. Perhaps this scenario could use an illustration note. Perhaps! It depends on what else you have happening in the story.

Or maybe Jake put his very best clothes on because he has something important to do, but yikes! He has put on two different colored socks and is going to be very embarrassed when he sits down for his recital and people start to laugh. He doesn’t know that his socks are two different colors, so the text doesn’t say it. This might be a good place for a note, depending on how the story unfolds, of course. 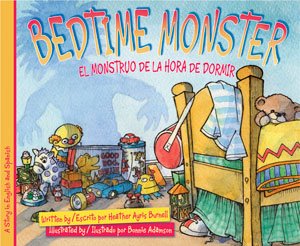 I used an illustration note in my manuscript for Bedtime Monster because Dad being a bit of a monster himself wasn't evident in the text. At all. Would the editor and illustrator have known that (spoiler alert!) dad had a tail at the end of the story? Definitely not. I put in a very simple, straight to the point note: (Illustration note: Dad has a tail.)

For do's and don'ts and how to format notes in your manuscript click here!