I had never really thought about it before--my book, Bedtime Monster, being influenced by another book. As I was listening to a talk about Where the Wild Things Are on NPR I remembered how I'd read Sendak's classic over and over as a kid. I loved that book. I never thought it was scary. People have said it's a scary book, that the monsters are based on Maurice Sendak's family. I just never saw the book that way. I didn't know the monsters were based on real people. I just thought it was an exciting book with lovely drawings. 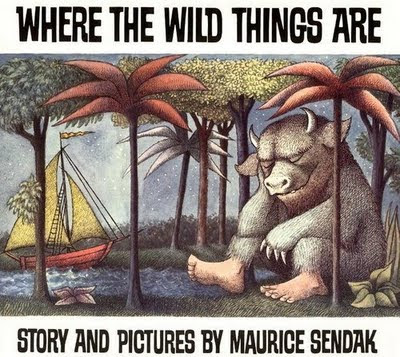 Maybe Where the Wild Things Are did influence Bedtime Monster. Bedtime Monster is about a boy who has a huge tantrum. It's so monstrous, in fact, that he turns into a monster, tail and all. And dad has a monstrous secret himself. In Bedtime Monster I was showing that everyone has a little bit of monster in themselves, and it's okay. We can get angry and still be good people. I'm sure monsters have been used many time throughout literature to represent human acts and emotions. I'm not saying that Bedtime Monster is scary, just that it's a given fact that people can act monstrously, and running away to a fun place for a while has a certain appeal. 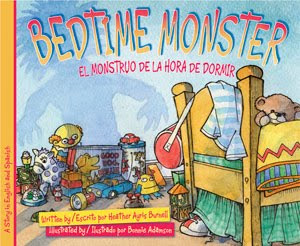 The bigger question? Did Where the Wild Things Are influence my life? Max dresses up--becomes someone else--and runs away to an exciting new land. I changed from a child to a grown up, basically became a new person, and ran off a on mountain adventure. I have yet to return from it. I believe that when I do go back home, dinner will still be hot.
Posted by Heather Ayris Burnell at 1:36 PM