STAR OF THE SHOW - Della Ross Ferreri talks about her new book! 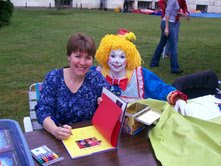 I love to feature writers and make them the star of my blog. How fitting it is that today I have Della Ross Ferreri, author of the new book, STAR OF THE SHOW. Della is the author of two beginning readers and her picture book, HOW WILL I EVER SLEEP IN THIS BED? was popular enough that Sterling Publishing reprinted it in board book format. Della has frolicked over today to talk about her brand new book and, of course, writing.

Congratulations on your book release, Della! What is STAR OF THE SHOW about?

STAR OF THE SHOW tells the story of a bossy big sister, Francine, and her tag-along brother, Max. When Max has the idea of putting on a circus, Francine immediately appoints herself the star of the show, and designates Max the assistant. Max gets fed up with Francine always getting the best part. This time, he wants the spotlight, too. But can Francine give up center stage? Through argument, compromise and imaginative play, they finally come together to present a wildly successful circus! It’s a fun story of sibling rivalry that kids can relate to, and, from what I hear, parents and teachers appreciate how the characters they end up working things out. I’ve received great feedback on the ending!


What inspired you to write this story?

My kids are the inspiration for most of my writing. My oldest daughter went through a bossy phase and took it out on her little sister. Whether it was dancing, playing school, or putting on a show, daughter #1 always took the lead role. In STAR OF THE SHOW, I exaggerated this personality trait. My character Francine is waaaaay more obnoxious than my daughter ever was. lol

What do your kids think about being the inspiration for this book?

They think it’s funny! They have fun remembering their playtimes together!


Which of the characters in STAR OF THE SHOW are you like, Francine or Max?

Hmmm, I guess I’m a little of both. Sometimes I take charge and run the show, but other times I don’t mind sitting back and letting someone else be in the spotlight.


What was your road to publication like for STAR OF THE SHOW?

In one word – LONG. We’re talking two to three years of submitting and revising. If you want the full story, here you go. The original version of STAR OF THE SHOW started out as an assignment for the Institute of Children's Literature. I sent it around and it went through a couple revision requests w/an editor, but ultimately was passed on. The story became stronger, though, so I am grateful for the editor’s time. Thank you, Shari. Then I shared the revision w/my Sterling editor and she thought it was funny and brought it to acquisitions. But Sterling already had a circus themed book (Tightrope Poppy) and a book with a similarly bossy, selfish character (Mine, Mine, Mine.) They also offered some helpful revision suggestions that I followed. Thank you, Heather, and folks at Sterling!

Then, STAR got critiqued at the Rutgers one-on-one conference and that helped tremendously, too. One problem that needed work was that Francine didn’t have a strong reason/motivation to change her mind and let Max participate in the show. I took my mentor’s advice and had Max get so fed up that he walks out, leaving Francine to struggle and feel the pain of failing to be able to put on a circus by herself. Thank you for that, Alexandra!

Then, after rounds of tightening and suggestions from my critique groups, (Thank you, Sparks and Pearls and my local ‘Soup Group!’) I came across somewhere on Verla Kay’s Blueboard, a mention of the Children’s Book Council list of publishers. That’s where I discovered Shenanigan Books. I submitted STAR OF THE SHOW in September 2007, and got a ‘we’re interested’ email a couple months later. Once the illustrator was finalized, I was offered a contract. Fast forward two years, and here we are, fall 2009 and Ta da! STAR OF THE SHOW is out! Thank you, Shenanigan Books!


Do you have a submission strategy?

Yes, I’m very persistent! I leave no stone unturned, and I’m willing to rewrite and reformat if a piece isn’t working in its present form. STAR OF THE SHOW went through dozens of rewrites. One of my other books, HEY! YOU’RE EATING MY HOMEWORK started out as a 900-word picture book, and I whittled it down to a 300 –word beginning reader that was eventually accepted at Bebop Books. My other book, HOW WILL I EVER SLEEP IN THIS BED? started out as a short poem that grew into a story with beginning, middle, end and a conflict for the main character to solve. It grew from three stanzas into a full-fledged picture book. So you see, I believe it’s important to be open-minded to the possibilities of what direction to take your stories.


What are you working on now? What are your plans for the future as far as your writing career goes?

I’m working on a sequel to STAR OF THE SHOW. I also have a few manuscripts making the rounds. One rhyming story is under consideration at a major house, so fingers crossed on that! I’ve had a couple deals fall through over the past couple years so it’s been a bit of a rollercoaster ride. Since I’m back to teaching, and keeping busy juggling my kids’ sports schedules and activities, sometimes it’s hard to squeeze in the writing.

I love the Blueboard! It offers camaraderie and support, and I’ve made some wonderful connections and friends. Verla is the most generous and caring person of all. She even helped critique STAR OF THE SHOW in its earlier stage. Thank you, Verla!


What advice would you give to aspiring writers?

Read a ton of books in the genre you wish to write. Join a critique group. Be patient. Let your stories simmer before sending them out. Be open to taking your stories in different directions.


What is it about writing picture books that appeals to you?

I love to think visually and picture the scenes as I write. Plus, picture book readers are at such a great age. I love their fresh view of the world and their developing sense of logic. I’m probably a 6 year old at heart!


This is the question I love to ask everyone. If you could live in any book, which one would it be, and why?

Two of my little guy’s favorite night time books lately are KISS GOOD NIGHT and YOU CAN DO IT, SAM by Amy Hest, illustrated by Anita Jeram. In the midst of all the nuttiness of teaching, writing, and juggling my family’s sports and activities, I would love to take a break and settle into the simple, cozy life portrayed in these gorgeously illustrated picture books.

What are you doing to support the publication of STAR OF THE SHOW?

I’m trying to get the word out as much as possible. I have a series of events lined up for this fall…story times, writing classes, and other bookstore and library events. The photograph I sent along was taken at Millbrook Community Day. My friend, Jackie, aka BeeBee the Clown, came out to entertain the kids and help promote my book. She took an ordinary event and truly made it extraordinary! Thank you, BeeBee! I sold a bunch of books that day, sponsored by my wonderful local independent book store, Merritt Books. Next stop is Barnes and Noble in Poughkeepsie for Educator Appreciation Day on October 10, and then a Charity Event on October 23 at the Putnam Hospital Center. Folks can check out my website for the dates and locations of events in NY: www.DellaRossFerreri.com

STAR OF THE SHOW is illustrated by Tony Weinstock and published by Shenanigan Books.
Posted by Heather Ayris Burnell at 6:37 PM