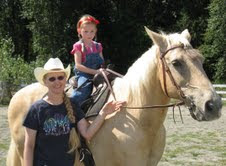 Susan K. Marlow has found a way to combine three things she loves: horses, adventure, and writing. She's the author of the Circle C Adventure series published by Kregel Publications. Susan has frolicked by to talk about writing series, book promotion, and her latest Circle C Adventure, TROUBLE WITH TREASURE. You can learn all about Susan's main character, Andi, at Susan's great Circle C Adventures website. But don't leave here before entering Susan's giveaway! Details are at the end of the interview. There's real gold involved!

First, I have some questions for Susan along with a big CONGRATULATIONS on the new book release! Hooray! Now, my daughter and I are dying to know, what sort of adventure is Andi going to have in her new book, Trouble With Treasure?

Well, right off the bat, through no fault of her own (for once), Andi ends up in jail! A little horseplay with a leaky water trough in town brings the unfriendly new deputy swooping down on Andi and her friends. She’s hoping a two-week trek into the Sierras to pan for gold will put all her troubles behind her. But Andi and her friends are so wrong. They tangle with a rattlesnake, a couple of “two-legged” snakes, and a seriously injured brother. Toss in a couple of bags of bank gold and being stranded in the wilderness, and that spells “trouble” in a big way.

Where did you get the idea for this story?

I originally wrote the basic story years ago, and it looked much different from what it is today. I wanted a story that highlighted Andi and the youngest of her older brothers, Mitch, who hadn’t been in the other books much. I wanted Andi to be stuck alone in the wilderness and responsible for saving her brother’s life. But it was just Andi and Mitch, and it didn’t work so well, especially when Mitch was unconscious a good deal of the time (it cuts into your dialogue opportunities). So I rewrote it to include Andi’s friend Jenny (from Book 4) and her good pal, Cory, and expanded the story into a couple of different directions.

When you sold your first Circle C Adventure, Andrea Carter and the Long Ride Home, you didn’t know it would become a series. How difficult was it to develop more stories for Andi?

I didn’t know it would become a series, but I was sure hoping it would. I had the first three stories already written (though I’d call them very rough drafts now). It wasn’t difficult to revise and submit those. But book 4 was totally new material, and it was tough filling in the blanks and making the story “work.” I wanted a story set in San Francisco for Book 4, but what in the world was going on in that city in 1881? So it took a lot of time to do the research and weave that research seamlessly into the book.


How did you learn to write series?

By watching TV during the 60s, mostly. Television shows are basically “series,” where your favorite characters have complete, new adventures every week. Without realizing it then, I fashioned my stories after shows like Star Trek. I knew there was a “teaser” opener (to keep people from changing the channel), scenes that always ended on a cliff hanger (to keep people from changing the channel), the “dark moment” or climax, and the satisfying ending. I knew and expected certain things from the characters. They interacted in a fun way. They never acted out of character. They evoked an emotional response in an impressionable young teen, and I made sure my first stories did the same thing. I guess I learned from observing.


Do you have any tips for aspiring series writers?

I believe that the most important element in a series is an engaging, likeable main character with whom young readers can identify. One young fan recently wrote me a letter and said, “Sometimes I pretend I’m Andi, riding and talking to Taffy.” Obviously, this young reader has connected with the main character. For her, it probably doesn’t matter what kind of adventure Andi and her horse have, so long as Andi invites the reader to become part of the story with her. It’s the character whom readers want to follow along on the journey. So make the development of your series’ “star” your most important consideration when thinking about writing a series.


You are an amazing book promoter. What are you doing to promote Trouble with Treasure?

You mean besides chatting with you and your readers? *grin* I have my usual bookmarks, postcard mailings, and Ezine campaigns. I have a growing fan list on the Circle C Adventures fan page on Facebook. I give away a lot of books through contests and sites on the web. I speak at Young Author conferences and do some school visits. And this year I’ve decided to have a booth at various homeschool conventions on the West coast.

I send out books for reviewers to review, and I created a book trailer, which I posted on Facebook. Then I asked a number of FB friends to “share” it on their profiles. This way my books and my name keep popping up, a little at a time. Unfortunately, this takes a lot of time, and it keeps me from writing.


How important do you think it is that authors promote their books?

Very important! On a scale from 1 – 10, the importance of partnering with your publisher to promote your books is probably a 9.5. I honestly believe that the reason I have six books in my serious (as opposed to two or maybe three) is because I have spent a significant amount of time (and money) getting the word out. The good news: it really does help. The bad news: it never ends. You can never stop, because once you stop promoting your book, people forget about it. The nice thing with a series is that a new book automatically promotes the other books in the series. This keeps what would ordinarily be a five-year-old back-listed book fresh for new readers.


What is one of the most fun things you’ve done to go along with your books?

I like doing contests on line and at conferences. I put a bunch of little plastic horses in a big jar and have a Guess the Number of Horses contest. The winner receives a Beanie Baby horse keychain, some real gold, a Chinese doll, or even a book, depending on which book I’m promoting at the time. The other fun thing is tying up a “set” of books with colored elastic string, along with a plastic horse, and selling them at a discount. They sell like hotcakes and they look so cute!


You say you’re a shy person, yet you do quite a bit of public speaking, from teaching kids to talking at author events to radio interviews. How have you learned to do public speaking?

Being a teacher and loving kids has been a “key” to making it through public-speaking venues. I’m comfortable around kids (my peer group) so of course school visits and writing workshops are my favorite kinds of events. For big groups (like school assemblies) I have found that a well-crafted PowerPoint presentation saves the day every time. It can be shortened or lengthened right at the time, depending on interest level and/or time available. Holding the remote is like clutching a security blanket. But outside the kid audience, I’m afraid I’m hopeless. The way I have learned to “do” public speaking in those cases (speaking to adults and doing radio) is by plunging ahead and saying, “Yes, I’ll do it,” and then taking a step of faith that God will see me through as long as I’m prepared. It’s totally nerve-wracking, and I don’t like it, but so far, God has seen me through.


Will we be seeing any more of Andi after Trouble with Treasure?

Oh, yes! Andi has one more adventure in this series, Andrea Carter and the Price of Truth. A quick blurb: Andi’s eyewitness testimony places a beloved citizen at the scene of a crime. Will the price of telling the truth be too high if it means losing Taffy forever? But Andi and Taffy’s adventures are not over. I’m writing a series of chapter books for young readers (grades 1-3) about Andi and Taffy when they were young. Those books should hit the market a year or so from now.


I’d ask you what book you would live in if you could, but I imagine you’d be right in there with Andi, or cruising outer space with the Star Trek crew. Am I totally wrong?

Heather, you know me too well! To be honest, I can’t decide which world I’d rather live in: the Old West or aboard the starship Enterprise. Either one is a journey of imagination that “. . . boldly goes where no [kid] has gone before.” 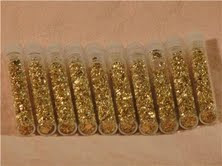 Susan is going to giveaway an autographed and personalized copy of Trouble with Treasure to one lucky winner. Plus she's throwing in a vial of real gold! What do you have to do to win? Just leave a comment on this here interview. If you tweet, blog, or facebook the contest and let me know I'll add another entry. U.S. residents only. Contest ends February 16th at midnight. Good luck!