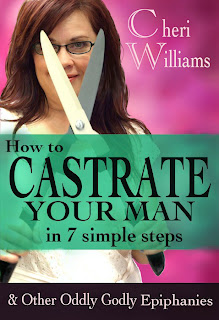 I’ve been asked to participate in The Next Big Thing Blog Hop by the fabulous Cheri Williams! Cheri is the author of the book of essays, HOW TO CASTRATE YOUR MAN IN 7 SIMPLE STEPS & OTHER ODDLY GODLY EPIPHANIES, and if she thinks I might be the next big thing it makes me think it’s possible. I certainly think she’s the next big thing! Be sure to check out her out at CheriWilliams.com.

Ginger Kolbaba, editor of todayschristianwoman.com says of Cheri's book, "...don't let the title mislead you. It may be edgy, but the content is filled with timeless truth about relationships, faith, and how to grow more mature--even while using potty humor."

My picture book, BEDTIME MONSTER, a story about a little boy who turns into an actual monster, tail and all, was published a while back. But in honor of Cheri and her love of potty humor I thought I'd tell you a little about something new. So, I'm going to answer some questions about a project I’m working on now that may just be the next big thing, if you're into potty jokes, karate, and talking sloths. Hey, you never know.

What is the title of your book?

Well, I'm not sure that I should say. It's kind of weird. Plus I always feel so sketchy talking about works in progress. Ack! This is scary! I will tell you that the title has the word dumpling in it.

Where did the idea come from for the book?

I was eating dinner with my family one night and misheard something, after which ensued much laughing and joking and possibly some soup spewing out of people's mouths. Potty humor, it always goes over well at the table.

What genre does your book fall under?

Which actors would you choose to play your characters in a movie rendition?

If this manuscript was made into a book... which was then made into a movie... it could be animated or they could do it ZOOKEEPER style. Along with the humans there are a few talking animals. Okay, quite a few. I think Will Ferrell would be a good sloth. Maybe Jack Black could be the evil anaconda. The heroic red panda has a really high pitched voice so maybe Rosie Perez? I hadn’t ever thought about this before. Funny how I can come up with the people who could do the animals voices but can’t think of who could play the actual people! I know, Jada Pinkett Smith could be the mom. She’s a totally cool mom. And we'd definitely need to find a fun, and limber, grandmother to play the MC's grandma from China. She is really good at karate.

What is the one-sentence synopsis of your book?

While under attack by ninjas at their Chinese Food Restaurant, Clayton’s grandmother forces him to drink the broth of a magic dumpling, throwing him into a sinister plot by an evil anaconda whose plan is to rule the world.

Who is your publisher?

I’m not quite finished with revisions so I haven’t sent it out yet, but I’m getting close!

How long did it take you to write the first draft of your manuscript?

Well, it’s taken a really long time because I’m easily distracted by my plethora of picture book manuscripts and I just kept rewriting the first four chapters until I could figure out an ending that would work. I’m about at the end of the revision stage now. Hooray! I think I came up with the idea about two years ago.

What other books would you compare this story to within your genre?

I just finished reading FAKE MUSTACHE by Tom Angleberger. If I could get somewhere close to that humor I would be ecstatic. That book is awesome! But I'm writing for a bit younger set. My story's more in the age range of the Adam Sharp books by George E. Stanley. I like writing for that age range. 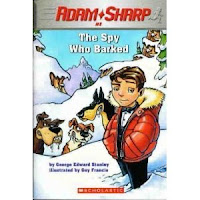 Who or What inspired you to write this book?

My little boys and their fabulous funny bones make me want to create fun books they love. My husband and daughter even got in on this in on this one though, and they are the ones I can usually count on to poo-poo the potty talk while the boys and I are cracking up!

What else about your book might pique the reader’s interest?

There is potty humor, ninjas, talking animals, and Chinese food. What could go wrong?

So, there you have it. Now you know about a little something I'm working on!

We're skipping a week in The Next Big Thing Blog Hop for a holiday break, but the hop will continue! Here is the list of authors who will be joining the hop for week 27 on January 2nd. I hope you’ll visit their blogs and learn more about their books. Maybe one of them will become your new favorite author!

Tiffany Strelitz Haber, author of The Monster Who Lost His Mean

Morgan Shamy, who is repped by Karen Grencik of Red Fox Literary

and last but definitely not least, my fabulous friend Branli Caidryn, author of Phoenix Splinter.

Posted by Heather Ayris Burnell at 9:52 AM