Illustrator of the Month--Bonnie Adamson! 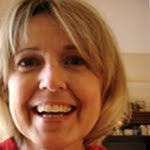 I decided to kick off a new feature in the new year: Illustrator of the Month! Who better to start with than the illustrator of my forthcoming debut picture book, Bonnie Adamson. Bonnie was kind enough to agree to be my guinea pig and let me ask her prying questions and feature some of her beautiful artwork on my blog.

Bonnie is a graphic designer and children’s book illustrator as well as a writer (as yet unpublished—stay tuned!). She is also the art director for Pen & Palette, the quarterly newsletter of the SCBWI-Carolinas region; is active in organizing writers and illustrators in her area; and co-hosts the great #kidlitchat Tuesday nights on Twitter (follow @BonnieAdamson). She and her husband have two daughters, two sons-in-law and three granddogs who offer endless encouragement and support.

When did you know you wanted to be an illustrator? What drew you to children’s books?

I remember when I was three or four years old, my father made a little cartoon flip book for me: a stick figure wearing a bowler hat, kicking a football. As the football arced away in one direction, the man’s hat fell off his head behind him. I was hooked right away. I was “the kid who draws” in school, but didn’t really consider illustration as a career until I was working as a freelance designer after college, and began commissioning myself to do the illustrations for design projects. 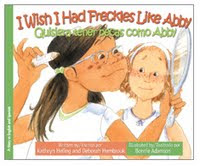 As to why children’s books, mine was the generation Little Golden Books were created for. I was NEVER without a book. I think I always dreamed about creating children’s books. I remember laboriously copying favorite books onto tablet paper and stapling the sheets together to make them “my own.” They were such magical things to me. (I still think magic is involved!)


Have you had any artistic training?

I had a very supportive art teacher in ninth grade, and private lessons with a local artist, but didn’t really get into serious art training until I already had a B.A. in English. I went back and got my B.F.A. in graphic design—which was a field in its infancy (before computers!), and still very much a part of the fine arts department—so the core curriculum was drawing, painting, printmaking, and sculpture. I stayed for graduate school, but was married by that time and left the program early when my husband was transferred.


Your first picture books, a two-book set: I Wish I Had Glasses Like Rosa and I Wish I Had Freckles Like Abby, written by Kathryn Heling and Deborah Hembrook, were published by Raven Tree Press in 2005. How did you break into the market? 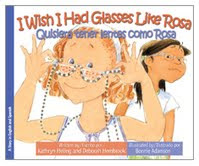 I joined SCBWI in 2000 and began sending out sample packets. I started to pick up some magazine work, and then the big break came in 2002 when I got a call from Troll Books to do a cover for a book-club edition of The Voyages of Doctor Dolittle. I was thrilled! The sad news was that Troll Books declared bankruptcy while my cover was at the print separator’s (the stage just before it goes on the press), so the book was never printed. It was a great experience working with the art director and editor at Troll, though, and I gained confidence that perhaps I did have something to contribute to the industry.

The next big break was a work-for-hire job for Raven Tree. They commissioned me to do a series of vignettes to accompany photo illustrations in a picture book about a little girl who travels to tourist spots around the U.S. with her parents. The project was shelved after I completed the illustrations, but the work put me on Raven Tree’s list, so I was one of the illustrators contacted when they put out a call for character studies for the “I Wish” series. I got the contract based on sketches I submitted. The first two books did well, so Raven Tree asked me to follow up with the two “I Wish” books for boys, which came out in 2008. (The original project for Raven Tree was also published in 2008, a three-book set called Traveling with Anna).

You also illustrated Feeling Better: A Kid’s Book About Therapy by Rachel Rashkin, for Magination Press. Can you give us any insight into how illustrators are paired with manuscripts?

Oh, I wish I knew—that’s the great mystery! When you’re starting out, I think it’s really just a matter of getting your work in front of the right person at the right time, which is why you take every opportunity to get your stuff out there. Before I had my web site, I sent over a hundred packets of printed samples to art directors and publishers. Now I’m working on a redesign of my web site and contemplating a new round of mailings.


How did you develop your illustration style? 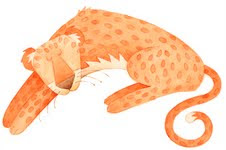 For years as a freelance graphic designer (my first career), I was involved with one- or two-color print projects. My clients rarely had the budget for full-color art, so I was forced to become proficient with black and white line—pen and ink, mostly. (I used to joke that I thought in black and white.) When I began to put together a portfolio for children’s book illustration I realized that wouldn’t do, so I took a year off to develop a long-dormant fascination with watercolor. That was a lot of fun. My “go-to” style now combines line work (pen and ink, pencil or colored pencil) with watercolor washes, but I’m experimenting with flatter, more collage-like applications of color, which is a throwback to my more heavily-graphic past—so I guess things are coming full circle. 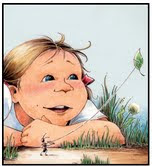 
What is your illustration process?

I do a lot of preliminary sketching. I like the underlying “blueprint” to be as tight as possible with regard to composition before I start painting—which is where I try to loosen up and keep a light touch.

When approaching a book, I generally do character studies first. Then, because of the publisher’s marketing requirements, I usually have to get a cover image down. Then it’s on to a thumbnail storyboard of the text, which allows me to see the entire book at a glance, and allows me to play with page layouts. Then, because I do the design work, too, I establish the graphic look of the book, building on the elements used for the cover image (typeface, page numbers, any repeating motifs or colors) into a page template, and then I’m ready to do the full-size sketches.

©Bonnie Adamson
About how long does it take you to illustrate an entire picture book?

Anywhere from nine months to a year.


Is there anything you wish picture book authors would keep in mind when writing?

Well, I’d say it’s easier for an illustrator if there’s lots of room for interpretation—illustrations can take care of not only the incidental descriptive details, but can portray a good bit of backstory as well. In one of the first “I Wish” books, the text simply says something about one of the characters being splashed with paint on the playground. The illustration reveals why there was paint on the playground—the children were outdoors helping make banners for the school fair. You don’t have to slow your story down with explanations of that sort. 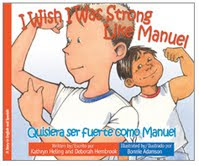 I’ve heard other illustrators talk about being sure there’s action on every spread, that the setting changes to allow fresh illustrations—but I’ve had the honor to illustrate several books that were very “internal,” and did not have a lot of variation in setting or action, and I find them maybe even more satisfying to work on. My advice would be to concentrate on your story, and not be overly concerned with what comes next while you’re getting it down.

Afterwards, the best thing is to try to trust the editing team, the one that was enthusiastic enough about your story to buy it in the first place, to pair it with an illustrator who will add just the right seasoning to the stew. I know this is easier said than done. It took a long time for me to realize that I’m not the right illustrator for some of the stories I write and submit (!), so I know it can be a scary proposition to give up that control.


With picture books, continuity of the looks of the character is so important. How do you achieve this page after page?

That’s something you have to be diligent about, especially as your familiarity with the character naturally evolves and affects your style over the months that you’re working on the book. I keep a character reference sheet handy, with measurements and proportions jotted down alongside sketches in several different poses. When painting, I try to work assembly-line style: I’ll have as many as ten illustrations stretched and ready to go on separate boards, so I can do all the skin tones at once, all the hair, eyes, clothes, etc. (I also keep notes on rough formulas for mixing paint colors.)


How do you decide on which scene from the text to draw for the page spread?

A good picture book is written in scenes, so it’s not so much a matter of deciding what to portray, but of deciding on where the focus should be to get the point across (thinking of page spreads as camera shots is helpful: you want a good mix of close-ups and panoramas). The primary concern, I think, is getting to the emotion of the scene. A picture book is an emotional journey. In practice, I try to do two things: get the facial expressions right, and match the relative quiet or busy-ness of the art and layout to the pace dictated by the text. 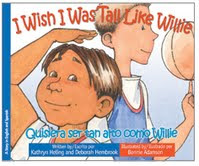 
If you use an additional illustrated story line in a book, do you decide on it purposefully or does it grow organically?

Both. You look for something to tease out that can be a support or a counterpoint to the text, and then it develops a life of its own. For the second “I Wish” series, I decided that I needed for each of the boys to have a dog—the dogs are never mentioned in the text, but they became valuable allies in how they reacted to what was going on. 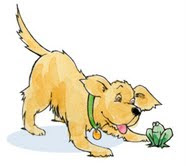 
What are you working on right now?

(Warning: I'm afraid I've baited Bonnie with this one!)

My latest project for Raven Tree is an adorable picture book by the fabulous Heather Ayris Burnell! (*blushing!) I fell in love with Heather’s main character right away and am hugely excited to be helping to bring him and his story to life. The book is called Bedtime Monster and is scheduled to be published in both bilingual and English-only editions in the fall of this year.


Want to see more from Bonnie? Her shiny new web site is still under construction, but you can view samples of her work online at http://www.bonnieadamson.net/.
Posted by Heather Ayris Burnell at 7:12 PM